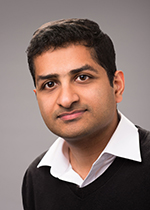 (Based on joint work with Nico Döttling)

Bio: Prof. Sanjam Garg is an Assistant Professor at the University of California, Berkeley. Previously, he was a Josef Raviv Memorial Postdoctoral Fellow at IBM Research T.J. Watson. His research interests are in cryptography and security, and more broadly in theoretical computer science. Prof. Garg obtained his Ph.D. from the University of California, Los Angeles in 2013 and his undergraduate degree from the Indian Institute of Technology, Delhi in 2008. He is the recipient of various honors such as the 2017 AFOSR YIP Award, 2016 Okawa Research Grant Award, 2015 NSF CRII Award, the 2013 ACM Doctoral Dissertation Award and the 2013 EUROCRYPT Best Paper Award.